The Things People Do

Several things happened since the last post here, most importantly me becoming a father.  On June 24 I witnessed the birth of my first child, a healthy girl weighing in just over 8 pounds.  She arrived about 10 days early so my family leave started a little ahead of schedule, meaning I'm off through the middle of July. Now I know how teachers feel.

Anyway, one of my coworkers for the past year, a Baby DA who filled a grant position in my office, is leaving this week after the funding expires.  According to long-standing office tradition, anytime there is anything significant in someone's life, we have either treats (trial win, work-related anniversary, etc.) or a "pig out" (leaving the office, birthday, etc.).  Tomorrow is the pig out for my coworker, a proud Southerner from Knoxville, Tennessee.  Given the circumstances under which he leaves, he requested "comfort food" as a theme.

There are two coincidental events justifying me bringing something: Birth of child and 10-year anniversary of working for the State of Wisconsin.  So, in order to meet the theme and celebrate my personal milestones, I agreed to cook a pork butt.

I prayed for good weather, and realized while at the hospital last weekend that early leave was perfect for an overnight smoke session, resulting in pulled pork for the office lunch.  I did some research, and decided to use my smoker to cook two Boston Butts totaling about 15 pounds.  Sam's Club provided the bone-in butts, and internet forum searches led to a recipe for rub, mop, and treatment.

Yesterday I made the rub, which is a nice combination of sweet and heat, and applied it to both butts this morning.  Here's the "before" picture of my rubbed pork -- that's a 9x13 baking pan for reference:

With the pork prepared, I had to set up the cooking equipment.  I used a Brinkman "Smoke 'n Grill" I bought at a garage sale about 6 years ago:﻿
Following advice from an internet forum, I layered charcoal briquets and chunks of oak and hickory in the fuel pan of the smoker:﻿
Placing the pan in the bottom of the smoker, I lit the starter coals in my chimney:﻿
Assembling the charcoal, grates, and water pan, the smoking began promptly at 5pm:﻿
A friend of mine arrived after about an hour, so I lifted the lid to show him the setup:
﻿
The cooking continued past nightfall, and eventually I was alone on the patio.
After 6 hours, the time came to rotate, switch, and flip the pork.  This is just before swapping the lower and upper pieces:
As I write this, it is 3:11 a.m., and other than ensuring the charcoal doesn't burn out, the hard work is done.  I'll tend to the smoker until the meat reaches 190 degrees, which should be around 9 a.m.  We'll hold the meat in a cooler until I can get it to work and pull it apart for what ought to be a delicious and special lunch.
﻿
Posted by Prosqtor at 03:12 No comments:

How I Spent My Sunday

I originally planned to ride up the west coast of Green Bay and then follow the Michigan-Wisconsin border on a state highway I've never ridden before, but a late start and household chores got the best of me.

So, Sunday I took a shorter jaunt, and rode some spots that are really growing on me, to the point that I'm not sure there's a better stretch of road that's this long in the whole state. I'm talking 20 miles of constant curves that are somewhere between "Tight Sweepers" and "Loose Twisties."

I started out from Appleton and headed north and west to Shiocton, which is an uneventful ride across farmland with a few gently sloping hills. I filled up in Shiocton (The River Rail bar has very good wings; regrettably they do not feature in this report), and turned north onto WI-187. 187 follows the Wolf River, and has some nice curves past farms on one side and riverfront homes on the other. There are spots to watch for farm equipment, but very few vehicles were out as I headed north toward Shawano.

The road straightens out after the Shawano County line, and a brief detour around Shawano and along the edge of Shawano Lake permitted me to avoid too much traffic and stop-and-go lights. I eventually hooked up with WI-47/WI-55, and followed a Jeep Wrangler filled to the brim with what looked like college kids from Madison. These authentic speakers of Truth to Power seemed to be doing everything possible to irritate me, which worked pretty well as we crawled onto the Menominee Reservation and into Keshena.

Just north of Keshena, we both turned north on WI-55, which winds through the woods along the Wolf River. This road is a recently repaved hidden gem, and if someone were enterprising they'd open a t-shirt shop at the Langlade County line and sell "Wolf Tail" shirts and stickers.

Elevation changes, nicely engineered curves, and billiard table road surface awaited me, as soon as I could get around the goofballs in front of me. I managed to pass them early in the northbound run, and soon had the road to myself. The bright sun filtered through the trees, which nearly sealed me into a green tunnel, made lighter and sharper by the mirrored visor on my helmet. I switched my music off and listened to the ST's motor as I switched between 3rd and 4th gear, keeping my speed at a reasonable rate above the posted 55-mph limit.  A universe made up of nothing but me, the engine, and the green tunnel sprang up out of the black pavement as I wound my way through the forest.

My plan was to ride past the Langlade County line, and to turn around in Langlade at the intersection of WI-55 and WI-52. I started to catch up to some slower traffic about 3 miles south of County WW, and decided I'd turn around there, ride to one of the riverside pullouts, and stop for a snack and some water. I turned around and stopped a couple miles back south into the reservation. I took my jacket, helmet and gloves off, cracked open a container of granola ("I'll show those Madison hippies!") and sipped some water from the Camelbak. Only the rare sound of a vehicle heading up the road interrupted the sounds of nature, and I relaxed and enjoyed the slowly moving river in front of me. 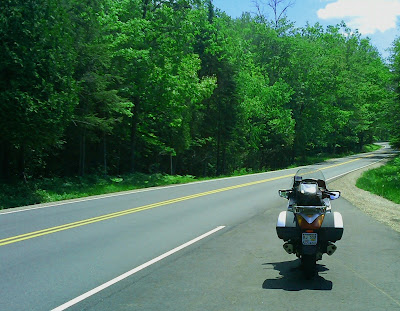 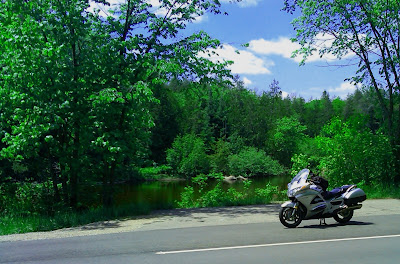 I elected not to bring my "real" camera with me, so I only had the camera on my Blackberry. After I clicked the button to take the second picture, I walked across the road and saw movement out of the corner of my eye. I looked up and to the left just in time to see a bald eagle swoop in and grab a fish from the river. I could not get the phone camera reactivated in time to snap a picture of the bird as it lifted into the air, flying through what moments ago was the frame of photo of the bike. Cursing my bad timing, I started to gear up and shortly after left for another run through the reservation.

This time I turned onto WI-47 and then quickly onto County VV, which is also BIA-5. VV is nice and curvy too, with trees on both sides of the road and little traffic. I followed this until it eventually became County G, riding through Gresham and down to Clintonville before heading back to home.

All told it was about 170 miles, and most of it with a smile!

Posted by Prosqtor at 00:07 No comments:

Holly Bunch, she of the OLR Public Reprimand, made me realize I hadn't posted anything in a long time.  That's all.


Lots of changes coming in the next couple months.  Stay tuned, I basically use Twitter to post quick thoughts and may use this blog as a form of therapeutic journaling like last time.  We'll see.
Posted by Prosqtor at 23:51 No comments:

Prosqtor
I work as an Assistant District Attorney in NE WI, with a primary emphasis on sex crimes. I am a prankster and button pusher, and beneath the witty comments I'm a grump.